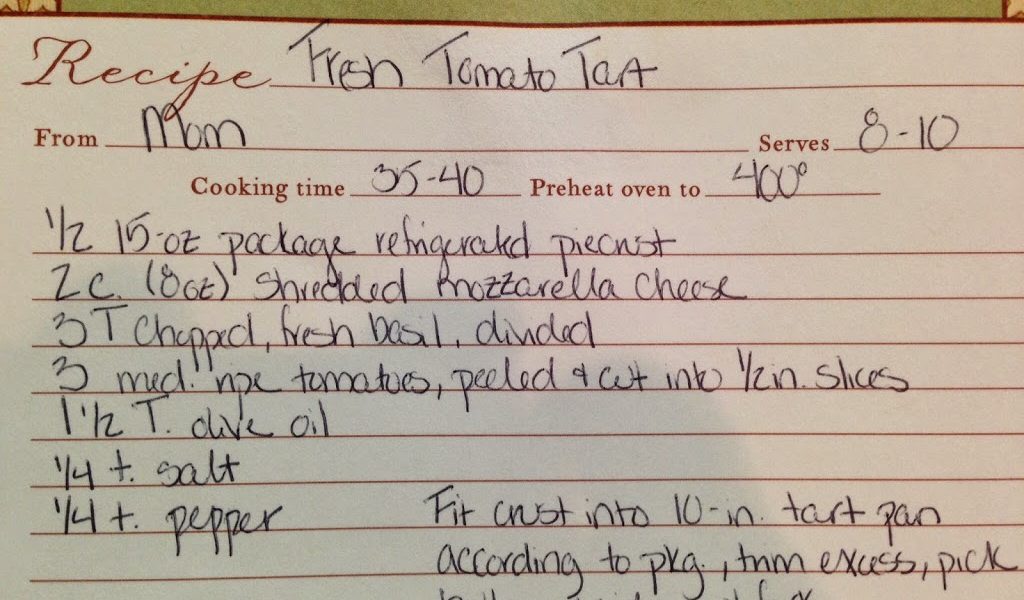 Last week the first official day of summer arrived, and with its appearance came the first batch of ripe tomatoes. We are so excited to see  the plants  skillfully started from seed by Steve and our friend, Chris, grow to true tomato producing maturity. All the heirloom varieties are at a peak, and if Mother Nature continues to bless them with just the right combination of sunshine and rain, we think we will have tomatoes for many weeks ahead.

So pull out your favorite recipes along with your curiosity for trying some new ones!  Below is a recipe for Tomato Tart which I had many, many years ago at my friend Karan’s house. I texted her to see if she remembered the recipe, and not long after, she forwarded me a picture of her handwritten recipe handed down from  her Mother. I made the tart tonight to test it out and it is just as delicious as I remembered it from all those years ago.  Cooking and sharing recipes makes eating such a joy!
Thank you Karan! 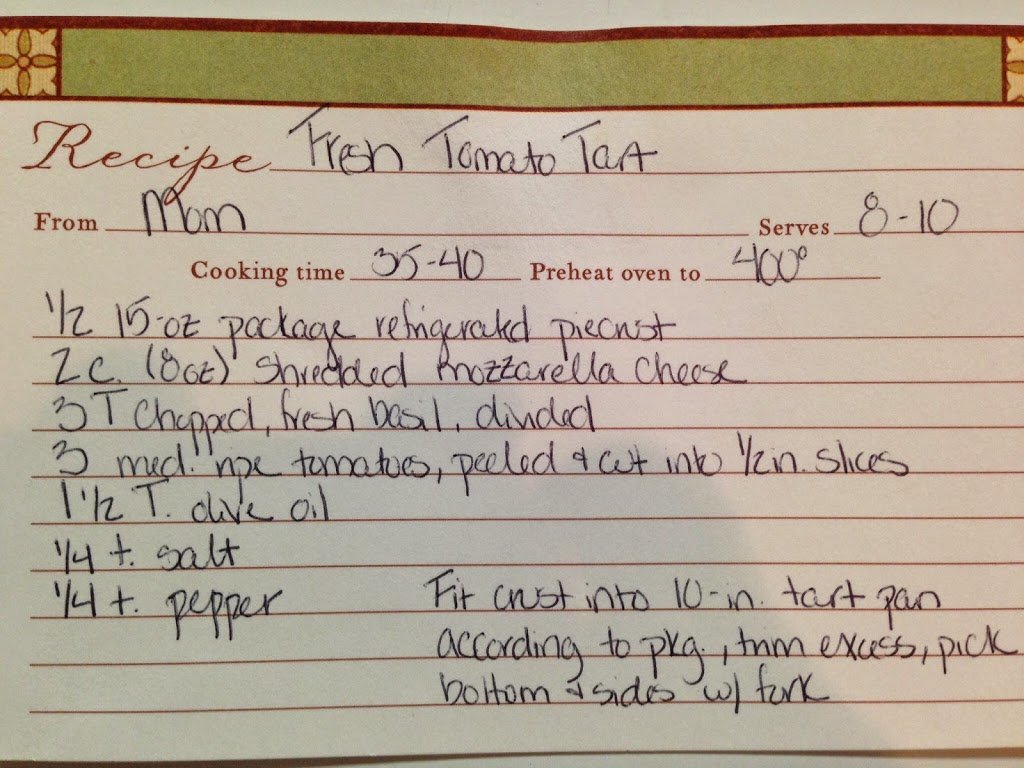 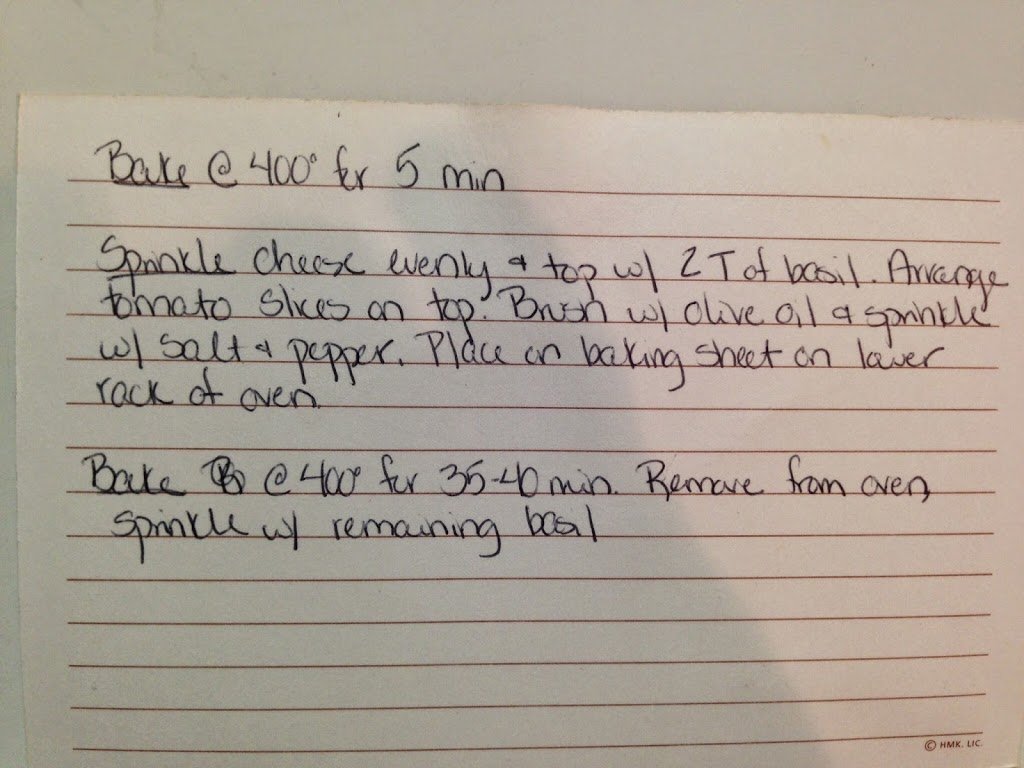 Above is the base recipe. I made a few changes as I will explain in the following photos. First, I doubled the recipe making 2 tarts. It’s easier for me to cook extra and not be left with another pie crust in the frig waiting to be used. For the first tart, I added shredded zuchinni as a final topping. The second tart was made without zuchinni.

Start by choosing a few ripe tomatoes. You can peel if you want, but I did not. Slice thinly and place on paper towels to remove some of the liquid.

You can also take a few squash ( I know you have plenty!) and shred them. This is really easy  if you have a food processor with a shredding attachment. Wrap the shredded squash in paper towels to remove moisture. You will use about 1/2 cup in this recipe. You can save the rest for zucchini pancakes or zucchini bread! 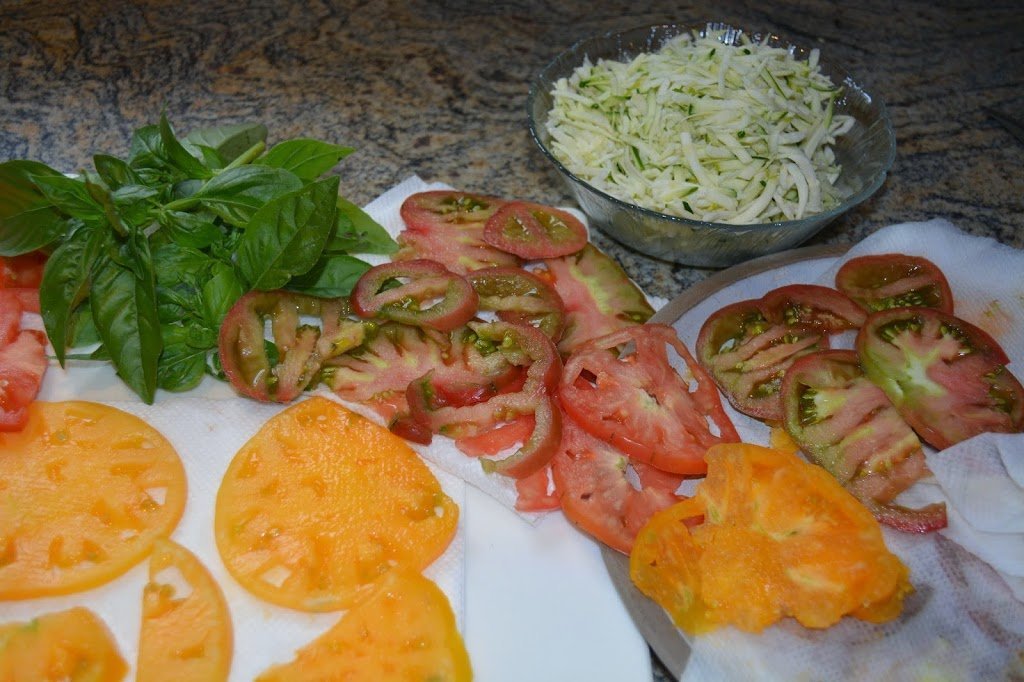 Chop the basil, shred the cheese, and then you are ready to assemble the tart. 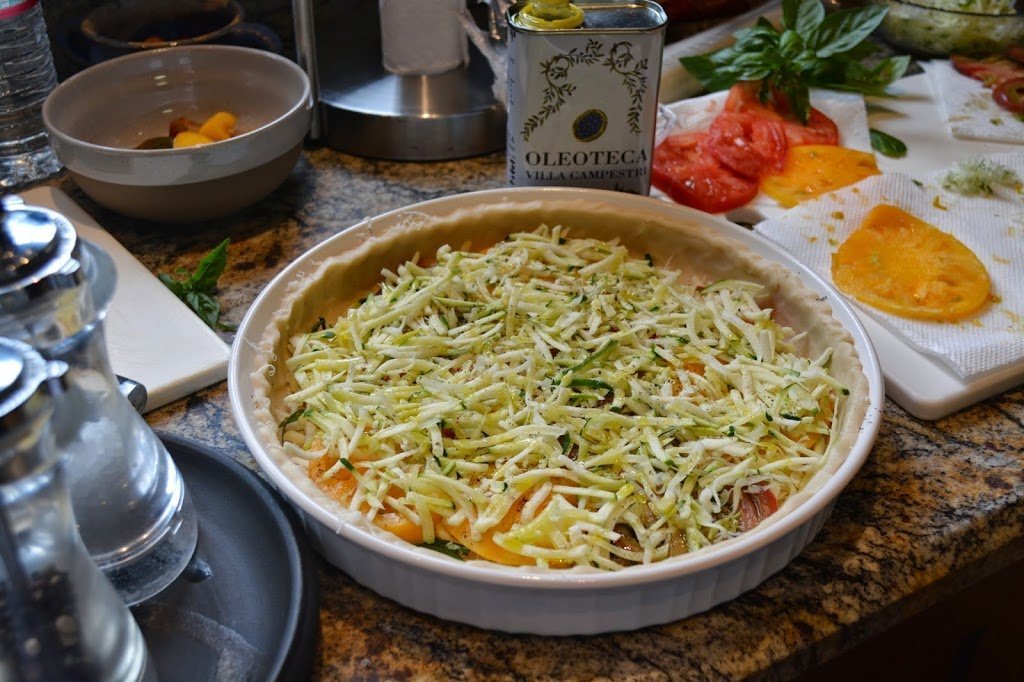 Here is the tart ready to go in the oven. For this one, I put shredded parmesan and mozzarella on the bottom, then basil, tomatoes (2 layers) and topped with the zucchini, salt, pepper, and olive oil


Try not to get overwhelmed with the amount of produce you receive in your CSA bucket each week. If you and your family cannot eat it all or give it away, know you can freeze almost anything, including tomatoes. Just toss them whole into a pot of hot water for a few seconds- just long enough to see the skins loosen. Remove the tomatoes with a slotted spoon to a bowl. Pull the skins off, then chop the tomatoes and put in a ziploc type bag squeezing out as much air as you can. You’ll be glad later this fall and winter to open your freezer and see a taste of summer before you. These frozen and chopped tomatoes can be made into salsa or tossed into soup or chili.

Here’s another recipe to try with the kale you will receive in your bucket this week. 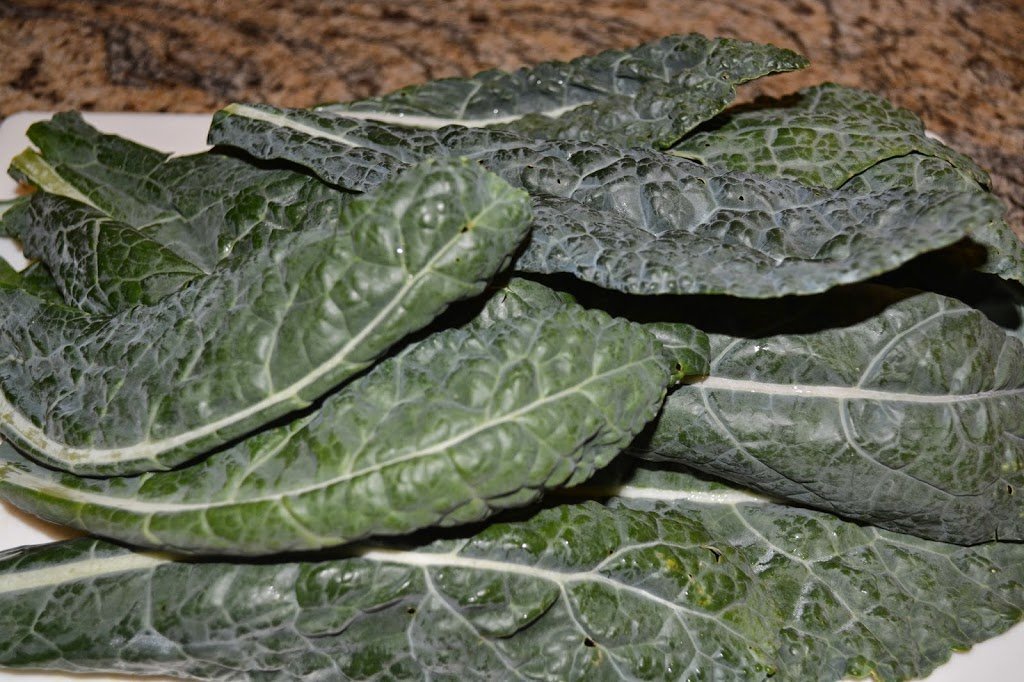 Place the leaves in a bowl. Drizzle with 1 teaspoon olive oil. Season lightly with salt and pepper. Toss to coat rubbing each piece with fingers to evenly coat. Arrange leaves in a single layer on a foil or parchment lined baking sheet.

Roast in the oven for 15 – 20 minutes until dry and crispy. If edges start turning brown, remove immediately! Serve right away or cool to room temp and store in an airtight container.
These chips are delicious as a snack or crumbled over a baked potato!
In addition to the tomatoes and kale, your CSA bucket this week will also include:
blueberries, cucumbers, green beans, red cabbage, onions, and sunflowers!
We hope you and your family enjoy cooking and sharing this week’s harvest!